Art historians like to make groups. They like to put artists into categories, into different boxes, and stick labels on them. This is all understandable – a lack of descriptive tags and names would make it much harder to describe an artist’s style. But it is not always immediately obvious which of these group names were slapped on by art historians and journalists, and which were declared by the artists themselves. 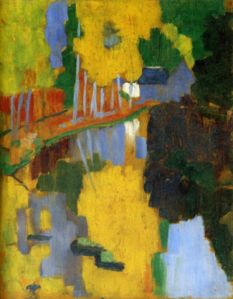 ‘Impressionist’ was originally used as a derogatory term by scathing critics, the Pre-Raphaelite Brotherhood were self-named, the Neo-Impressionists were also christened by a journalist, but a friendly supporter this time, and as for so-called ‘Post-Impressionism’… well, that wasn’t coined until after many of the artists it applied to were dead, and is considered by many as meaningless and inaccurate. The Nabis, however, were one of the tightest-knit and most clearly-defined artistic groups. They banded together in 1892 at the Académie Julian, flocking around Paul Sérusier upon his return from Brittany bearing wisdom imparted from Gauguin and The Talisman, which he painted under Gauguin’s guidance. The members were soon giving each other nicknames, meeting in Paul Ranson’s studio (known as ‘The Temple’), and sending each other letters in a secret language. 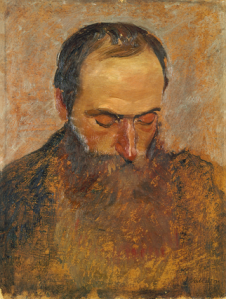 Though devoted to their group throughout the 1890s, by the turn of the new century these artists had gone their separate ways. This might not surprise you, taking a quick look at their works; although there are certainly stylistic similarities, you might not immediately group these artists together. The things that united them (devotion to Synthetism, interest in the theatre and in decorative art, desire to move away from both Impressionism and academic training) also left room for a wide variation in media, religiousness, and style. 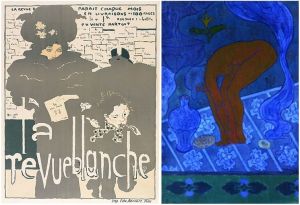 The influence of Japanese prints upon their work, seen in the prominence of large areas of flat colour, pattern, and a strong focus on the decorative is another clear feature of the Nabis’ art. And yet the next Nabi work you chance upon may show none of these characteristics. Does it seem, for you, that these ‘Nabis’ were really united through a particular style, or were they perhaps simply a group of artist friends drawn together more by their sense of fraternity and love of secretive group behavior? Decide for yourselves by picking up a copy of Nathalia Brodskaia’s Félix Vallotton, or Albert Kostenevitch’s The Nabis. For a closer look at Vallotton’s work, head along to Amsterdam’s Van Gogh Museum from 14 February until 1 June 2014 to visit their exhibition dedicated to the artist.

Based on his numerous nudes, one can surmise that Félix Vallotton loved women – he loved their beauty, their coquetry, even their flaws. But his affection for women never went beyond the canvas. 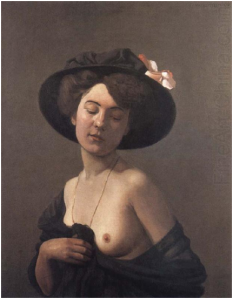 For many years, he led an affair with Hélène Chatenay, who was also his model for several of his paintings. Hélène was very dear and loyal to him, even growing close to the Vallotton family. But as Vallotton was devoted to his craft, not to Hélène, he left her for the elderly widow, Gabrielle Rodrigues. Vallotton didn’t even bother trying to hide his true motives for his engagement to Gabrielle Rodrigues – she came from a distinguished family of wealthy art dealers.

When looking at some of works, one can catch a glimpse in his character. Just like in his woodcut Money, converted his romantic affair with a woman into one of financial gain. 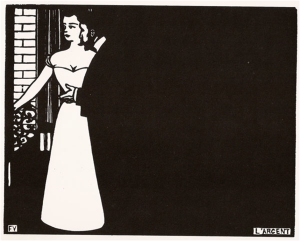 In letters to the Rodrigues family, he claims to love Gabrielle genuinely, but his betrayal to Hélène shows that he couldn’t love women; he only loved himself and his craft. Women were as important to him as the trees in his landscape and the flowers in his still lifes.

For a chance to see some of Vallotton’s works, visit the exhibition entitled Felix Vallotton: Fire and Ice at the Grand Palais National Galleries running until January 20, 2014. But if you can’t make it to France, you can admire his work from home – check out Natalia Brodskaia’s latest book Félix Vallotton in print and ebook format.

“Everything thunders and smells of battle,” declared Félix Vallotton in July, 1914. War was engulfing Europe and even artists, so often pictured as absent-minded beings, isolated in their studios, were inevitably embroiled along with the rest of society. Vallotton felt compelled to contribute to the war effort but, at nearly 50 years of age, was dismissed as too old for army enrolment. So instead he turned to reflecting the war through his art. Or at least, he attempted to. 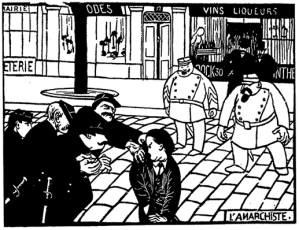 Growing up in the Jura region of Switzerland and then moving to late-19th century Paris, Vallotton had experienced his share of radical political environments. END_OF_DOCUMENT_TOKEN_TO_BE_REPLACED

Felix Vallotton tried his hand in many art forms, ranging from landscapes to woodcuts to printmaking. While he is probably most celebrated for his nudes, his woodcuts speak more to his talent as an artist.

In his paintings, his palette choice, technique, and subjects (usually naked women) manage to capture the attention on any onlooker. But his woodcuts contain a richer and more mysterious meaning.

The woodcut entitled Money (below) presents a scene between a man shrouded in darkness and a woman, whose white dress lends her an air of innocence. While at first I considered the man to be a predator and the woman to be a helpless victim of his advances, the title eventually convinced me that the woman probably plays a greater role than she first suggests. Rather an innocent, damsel in distress, could she instead be money-hungry prostitute luring her next client through cold demeanour?

That is the beauty of Vallotton’s woodcuts. END_OF_DOCUMENT_TOKEN_TO_BE_REPLACED

When leafing through Felix Vallotton’s paintings, it is noticeable that he enjoyed painting group scenes. There is a group of men playing poker in The Poker Game, a group of men talking in The Five Painters, a group of men drinking in The Bistro, and a group of women bathing in The Turkish Bath and in Summer.  He frequently portrayed groups of people socializing, but rarely do the genders mix. Men and women only come together if there is underlying sexual tension like in The Visit or The Red Room. Aside from that, it seems that in Vallotton’s world, men and women reside in separate spheres.

Of course, some of the segregation stems from social conventions of the period. During Vallotton’s time, it would have been highly inappropriate for a classy dame to play a round of poker or drink with the boys at the local tavern. But the segregation found in his paintings could also indicate Vallotton’s intimate thoughts on men and women.

The men can always be found in male-dominated spaces such as bars or studies, donning expensive tuxedos and perfectly manicured moustaches. 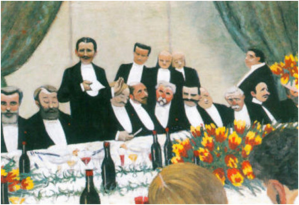 The women, on the other hand, are set against natural backgrounds, usually lounging about sans clothing. END_OF_DOCUMENT_TOKEN_TO_BE_REPLACED

Before photography came along paintings were undoubtedly the best way of providing a lasting imprint of a person’s physical appearance. It’s always confused and delighted me how dabs of paint on a canvas can be transformed into a likeness of a person, and at the hands of the best artists, can reveal a true sense of temperament and character. And due to our natural predispotion to study faces, it is perhaps one of the hardest painterly tasks to get right (one only needs look at the sincere but botched ‘Monkey Jesus’ fresco to see how wrong it can go). 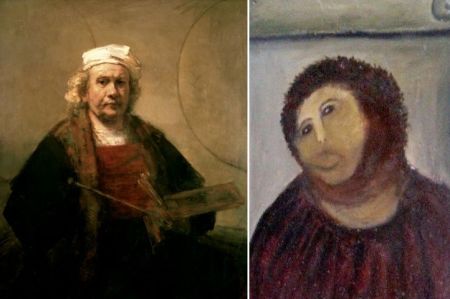 With this, the self portrait is perhaps the most honest form of exposure an artist can undergo. It has enabled the likes of Rembrandt, Van Gogh and Frida Kahlo, to display their changing faces, both physically, and as artists. Another great, but lesser known, artist to provide us with a lasting memoriam of his changing face is Felix Vallotton. 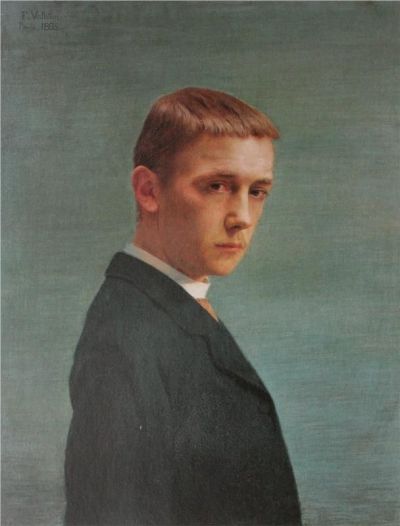 One of Vallotton’s earliest self portraits was completed in 1885, the artist aged 20. Here we’re presented with an artist fresh out of his teens, with a mere fuzz of facial hair and innocent gaze, and yet the slight curl of the lip marks a determination and forlornness beyond his years. This early example nonetheless prefigures some of the older Vallotton self portraits. The left turn of the head is common casting his face in half profile, while those eyes stare piercingly in our direction.

As age caught up with Vallotton we see responsibility creep into his face. His huge output must have taken its toll and the 1891 portrait (Vallotton here reminiscent of a young Dustin Hoffman) is fraught with shadow, his face seemingly resigned and weary. The two woodcuts from 1895 reveal deepset lines below the eyes and around the mouth, and yet a 1897 portrait seems to offer a more youthful portrayal, perhaps owing to the fact he met his future wife the year before. The latter paintings reveal the onset of grey hair and glasses as Vallotton settled into his later years, and yet the pose and gaze are almost identical from his youthful paintings. 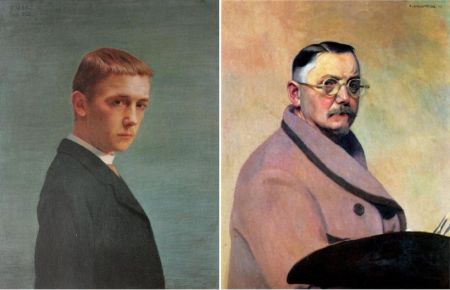 As only the best portraitists can, Vallotton’s reveals not only his changing face, but also the juxtaposition of unity and flux that he underwent as a person over the course of his life.

Should these portraits inspire you to take a look for yourself, a Vallotton retrospective opened recently at the Grand Palais, Paris. If that’s a little too far afield, you can always pick up a copy of the new Nathalia Brodskaia’s Vallotton title (available in print and ebook format), to find out about the man behind the paintings. 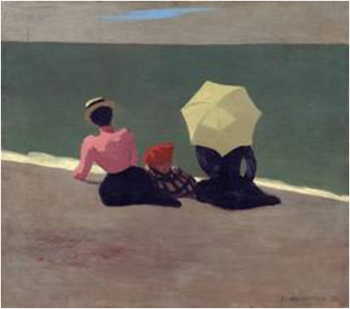 Félix Vallotton is perhaps the chameleon of the Nabis era. With a traditional start in academic and portrait painting, Vallotton mastered printmaking, portrait painting, wood engraving, Nabis-style genre scenes and nudes, and then moved on to Realism before leading the way for the New Objectivity movement. He did not stop at painting, however, but tried his hand at writing no fewer than eight plays and three novels. Whilst these may not have been the most significant or even best-selling tomes of their time, it was still a remarkable achievement. After adding landscapes, still life painting, and sculptures to his already impressive repertoire, the resulting impression of this artist is that he was not only a style chameleon, but a fantastic over-achiever. END_OF_DOCUMENT_TOKEN_TO_BE_REPLACED

When looking through Felix Vallotton’s artistic catalog, the amount of nudity is great. Vallotton used naked women in any context, from nude women bathing to nude women playing with kittens. 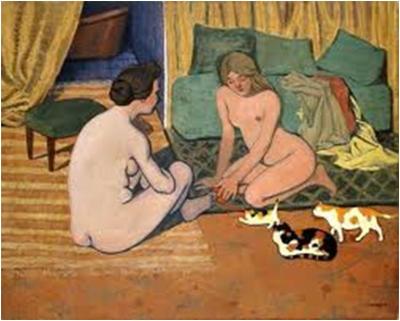 Vallotton, like most artists, appreciated beauty, including the beauty of the naked human body. But while the artist might have seen the beauty of the female form, what exactly does the observer experience when confronted with subtle eroticism? END_OF_DOCUMENT_TOKEN_TO_BE_REPLACED